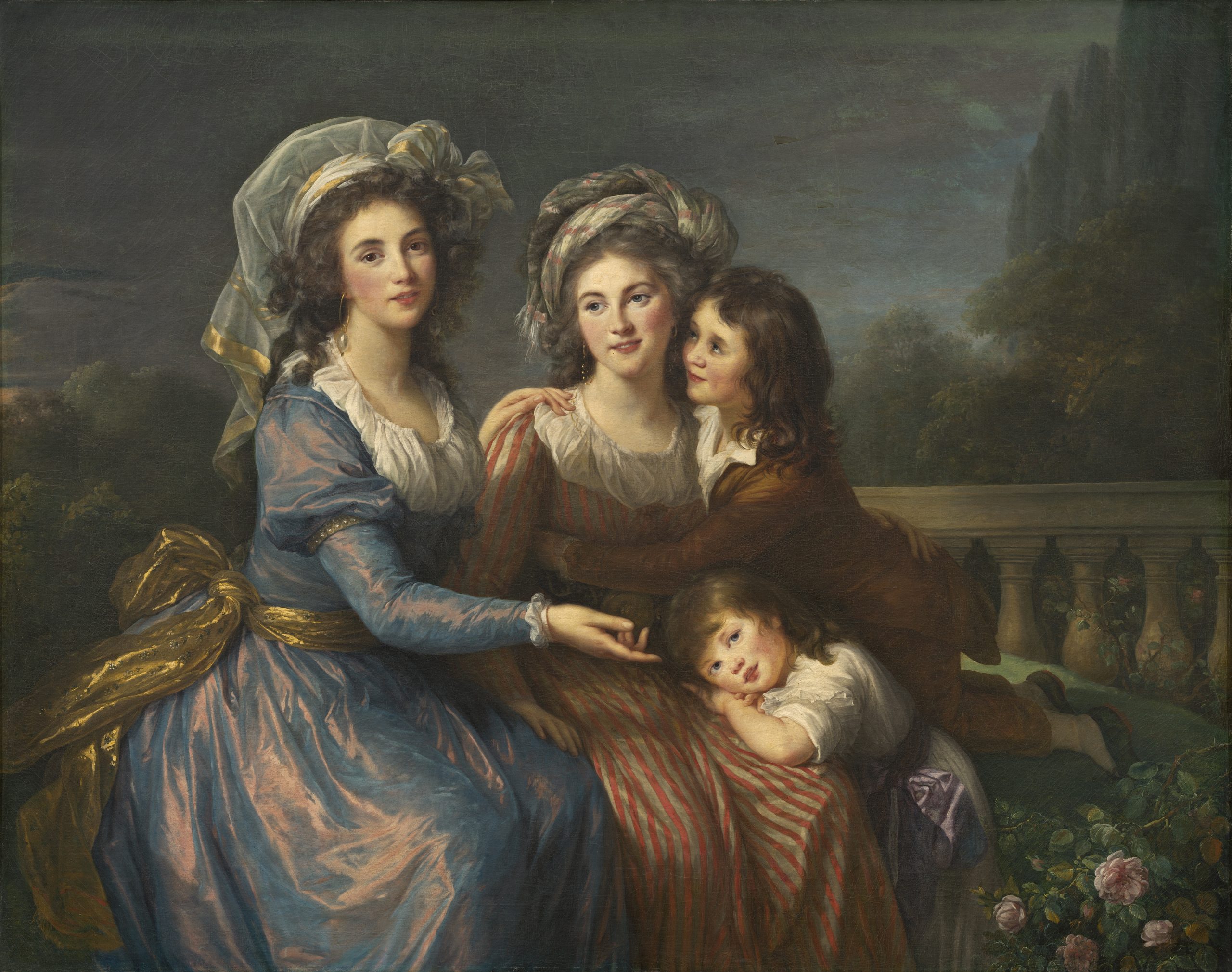 Previous blog entries here have noted that no portrait picture survives depicting the duchess of Elbeuf, and indeed that we have little clue about what happened to her art collection as a whole — or even if she had one at all. Fortunately, one remarkable visual entry point into the duchess’s world is available to us. For, a couple of years before the French Revolution, a number of her closest relations sat to have their group portrait painted by one of France’s leading artists in this line of work, Élisabeth-Louise Vigée Le Brun. The painting survives, and is now owned by the National Gallery of Art in Washington, where it is displayed under the title The Marquise de Pezay, and the Marquise de Rougé with Her Sons Alexis and Adrien (fig. 1 above).

On this medium- to large-sized canvas (a rectangle of 155.9 x 123.4 cm, or roughly 5 x 4 feet), we are shown two elegant young women, one of them being embraced by her two young sons. Our group is depicted seated on a neoclassical terrace, hinting at a country-house setting. Much of the paint surface of the image is taken up with women’s voguish and elaborate headdresses, billowing glossy robes, and other expensive adornments. At first glance, we seem to have stumbled into some kind of high-society fashion show where the wealthy and beautiful parade their assets and their estates. Blooming roses peek out in the corner of the image, renewing the sense of youth, beauty and showy luxury.

Who were all these handsome and carefree people? The mother-and-sons trio depicted on the right hand side of the image are Victurnienne Delphile Nathalie de Rochechouart Mortemart (1759–1828), the daughter of a duke, who had married the marquis de Rougé in 1776, and her infant children Bonabé-Louis-Victurnien-Alexis (1778–1839) and Adrien-Gabriel-Victurnien (1782–1838). By her marriage, the marquise de Rougé became part of the extended paternal family of the duchess of Elbeuf (who was a de Rougé by birth). She was widowed when, in 1783, her husband died while crossing the Atlantic; an army officer, he had been sent to join French forces fighting in the American War of Independence, but appears to have got no further than the Caribbean by the time of the cessation of hostilities, and to have died on his return voyage to France. Relatively little is known about the other sitter in Vigée Le Brun’s portrait, Madame de Pezay (seated on the left). Born Caroline de Murat, she had married the soi-disant marquis de Pezay, but was widowed a decade prior to the painting of this portrait. The friendship of the two women sitters in the painting was noted by Vigée Le Brun herself, in her memoirs, where she also recalled that they had been part of her circles of sociability in pre-revolutionary Paris.

The visual construction of Vigée Le Brun’s painting serves to foster the impression of an intimate circle of interlocking friendship and of familial felicity. At the centre of the image, a rough circle is formed by the hands and arms of the several sitters: the group are united by touch. At the same time, a kind of narrative moment is provided by de Pezay, the semi-outsider in the group, whose outstretched right hand serves to point the viewer’s attention to the two young boys. It seems appropriate that the exact geometrical centre of the image is occupied by the marquise de Rougé’s bosom: peel back the fashion statement and the tribute to fellow-feeling, and the image seems ultimately to be more concerned with celebrating the themes of motherhood and of family continuity in the male line. As the art historian Marcia Pointon has highlighted, while the genre of ‘conversation piece’ — the name given to this kind of intimate group portrait — might seem to be merely a private and informal image, this was in fact an artful illusion: for such images also had a public dimension in that they were concerned to showcase progeny, property and patriarchy.

Indeed, this picture wasn’t just designed to be seen by a small circle: it would be thrust into the most public art forum in Europe of the day, the Paris ‘Salon’, where it was exhibited in 1787. The public exhibitions of the Royal Academy of Painting and Sculpture were held in the Salon Carré of the Louvre palace, giving rise to the name ‘Salon’ to describe an art show. Thanks to a contemporary engraving representing part of the hang of that year’s Salon (fig. 2 below), we can even locate where exactly our portrait was placed in the exhibition room: it can be found above the door on the Salon’s back wall, flatteringly positioned with just one picture separating it from the grand portrait of the queen, Marie-Antoinette, and the royal children, which was another of Vigée Le Brun’s contributions on display that year. Far from being a private image, then, this painting may be said to have launched the young sprigs of the de Rougé family very conspicuously into the limelight. 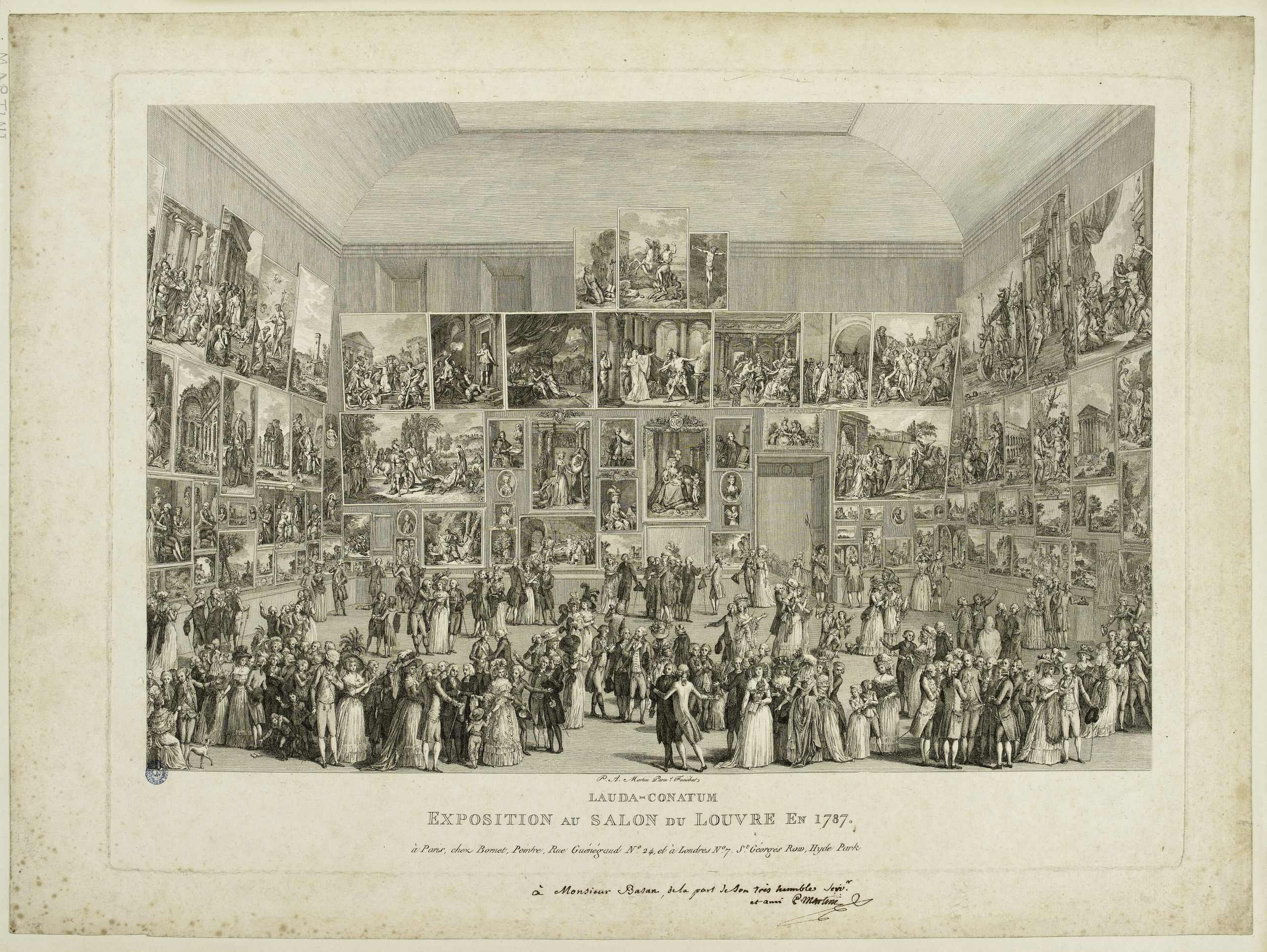 It may have been no coincidence that this painting appeared on the scene at just this juncture, for over the previous year a series of events had markedly consolidated the fortunes of this branch of the extended de Rougé family. The elder of the de Rougé boys pictured in this painting, Bonabé-Louis-Victurnien-Alexis, was already due to receive a large chunk of the family patrimony which the duchess of Elbeuf held in her hands, centred on her estate at Moreuil in Picardy. But the long-anticipated death in 1786 of a childless cousin, Gabriel-François de Rougé, had set in motion arrangements whereby a further large slice of the duchess’s landed property, previously slated to pass to that cousin, would instead go to him. The duchess of Elbeuf had signed off a set of legal papers confirming this arrangement in May 1787 — a few months before the Salon exhibition opened. The assets involved were her grand Paris town palace, called the hôtel d’Elbeuf, and various properties in Champagne and the Clermontois (including a château). Also in this bundle was a private chapel in the church of the Jacobins in Rue Saint-Honoré in Paris. This was an address which, during the French Revolution, would take on a jarringly different complexion, as the base of a radical political club for whom aristocracy was a bête noire which should be extirpated from France.

The duchess kept a life interest (usufruct) in these several properties she transferred to her young de Rougé relation: but sooner or later they were set to move fully and seamlessly into his hands. With the French Revolution, however, all these elaborate plans were thrown up in the air. The de Rougé trio pictured here would spend much of the revolutionary period seeking a place of greater safety. In the summer of 1790 a hoped-for haven at the duchess of Elbeuf’s château at Moreuil would prove to be no such thing, amid a tense standoff between the local country-people and the ci-devant duchess and her relations.* The de Rougés then fled France and so were classified as ‘émigrés’, a punitive legal categorization which made their property — presumably including this painting — subject to seizure. It would only be with the Restoration that the family’s fortunes were substantively re-established.

*As well as the further detail provided about this standoff in the previous post linked here,  please note that this episode will soon be available as part of the English translation of parts of the Letters. More details to follow soon.